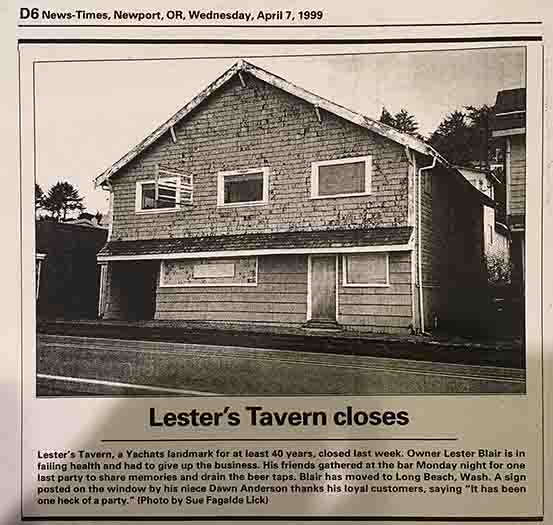 The Drift Inn was built in 1929 with wood brought down the beach from Toledo. The bar “shut down” and became an ice cream parlor publicly during prohibition, with a dance hall, drinking and card playing upstairs. It also was the center of the community, with pot-lucks and the place to bring your elk and deer for curing. Lester Blair bought the place in the 60’s and continued the partying and ignoring laws tradition. The Drift In was a place unto its own, where the fringe were the norm and no holds barred.

Lester’s Drift In was a rough place. Lester himself was an amateur boxer and in the early years the upstairs held a large boxing ring. Lester would encourage fellows to “work out their differences” up-stairs. Many people in town today remember intimately the fights inside. If anyone tried to interfere, Lester would get right in their face and tell them to back off. He loved a good fight. Les also loved women, we loved his sweet pink powder room.

The Drift Inn appeared scary to the uninitiated. Some people walking by would cross the street and walk around the old Drift Inn. Smoke billowed from the door when it opened and when you looked through the cracked wavy glass window, the place was dark, hazy and smelled bad. It was the infernal boys club, though women came too. Some of the boys resented it when Lester would insist everyone curtail the cussing around the women. There were some dynamic pool players and people from every walk of life. Hippies, rednecks, suits, rich, and poor. It was rich, tantalizing, cob webby, simple; with textures of lives that belied the surroundings. It was a place that left no one untouched who dared go in. It was magical, an amazing display and acceptance of humanity.

The old Drift In shut down in 1999 when Lester kept having mini strokes and couldn’t remember if you paid him or not. Draft beer was 35¢, wine and a pool game was 50¢. Lester was a boy who left home at 14 and ended up working at the local mill in the day-time and running the Drift In at night. It was an interesting melting pot of ideals, and experiences. Lester became the father that many boys lost, forgot or never had. He was a hard drinking, hard working, tough SOB who provided a community living room for young boys to grow into men. He stood up for them, expected them to stand up for themselves, to honor women and forgave them their frailties.